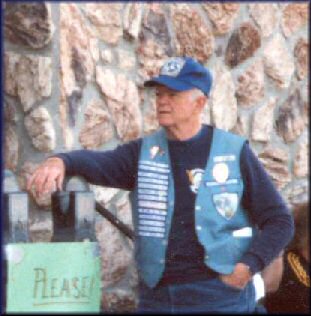 When Joe David transferred from New Jersey II to Heaven I we lost a good friend, a dedicated police officer, a loving husband and a devoted father and grandfather.
Joe was a member of NJ II for over twenty years. During this time he served as President,
Vice President, Secretary, Treasurer, Director and Past President. He also chaired a number of committees and worked to promote the image of motorcycling. Joe won numerous awards for his riding abilities and took our Chapter's most prestigious award, the Yost Trophy, four times.
Joe was such gentleman that he refused the four-foot mahogany beauty two times and asked instead that it be given to other members who had also worked very hard for the Chapter. Joe was involved with numerous charity events and always found the time to take God's special children for motorcycle rides at the NJ Special Olympics and Hand 'n Hand.

When Joe entered the gates of HEAVEN I he had been retired from the Paramus, NJ Police Department for seventeen years. He left behind Marilyn, his wife of forty years, two sons, Joe Jr. and Glenn and a grandson, Joe and granddaughter, Lauren. Joe received a proper Blue Knight send off.
During the wake, members of NJ II stood at his side, his Department provided a color guard, a piper and pall bearers. Members from seven Blue Knight Chapters joined to provide nineteen road guards for his last ride. Many tears were shed as a piper sounded the notes of Amazing Grace.

Joe always called Marilyn the love of his life and for their 25th wedding anniversary he bought her, her very own motorcycle. In the years that followed they rode side by side as they toured with fellow Blue Knights. Although Marilyn and Joe shared many motorcycle trips over the years, the one Joe talked about the most was the trip covering Canada and the "four corners" of the United States. When they returned home they had ridden 12,000 miles in six weeks.

Joe purchased his first Harley in 1947, and very much like today, he had to wait for production and delivery. In only nine months Joe traded up to a brand new 1948 model. His '47 Springer had over 26,000 miles! It gives meaning to the term "Iron Butt". So began Joe's undying love for Harley
Davidson Motorcycles.

When asked for advice by other riders, he noted that each rider must determine his or her own limits and time frames. A suggestion he had for new riders was to "protect yourself at all times". Operate at safe speeds for the road, traffic and weather conditions. Watch out for the other guy, because he's not always watching out for you. Joe always practiced these riding principles and you could see it in his riding style. You always got a sense of security when Joe rode with the group. His sense of conviction was not only within the parameters of riding, it followed him through life. He was a good cop, he worked many years helping children in his hometown of Paramus, his dynamic presence at meetings, get-togethers and social events was always formidable. Simply put, he inspired people.

Someday when you transfer to Heaven I you'll see a small child riding behind Joe ~ as he thunders about the Heavens ~ that's his grandson Michael, who was taken into God's care shortly before Joe made his final transfer. Joe always worried that Michael would be alone, so perhaps now they ride together again.

Let me assure you, Joe was, is now and will forever be, a perfect example of the proud image of the BLUE KNIGHTS. Though parted from his earthly body, Joe's friendship, love and kindness will always remain as a mainstay within our Chapter. We miss him and will always feel an emptiness in our hearts for this gentle man, who gave love in it's purest form. God grant him peace. 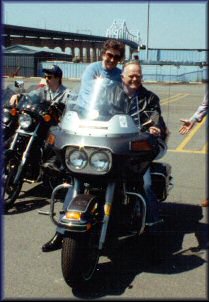